Brainstorming often sucks and 20,000 creatives agree with me 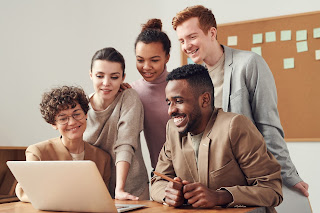 Two hours after it was published, an article snook into my Google feed. It proved that the algorithm not only knows what I think, but how I feel.

The article was called: "Brainstorming meetings? Creative types are not into them".

In Google's creepy way it was trying to say: "You're not alone. Others feel the same way too."

After googling how to get off the grid, I read the article.

The article discusses a survey, which interviewed around 20,000 creative professionals.

It claims that "a majority of these professionals—including writers, musicians, photographers, and podcasters—find that brainstorming is largely unhelpful for solving a creative challenge."

There are many valid reasons why creatives would say this.

As a former PR & marketing agency copywriter, I can recall many bad brainstorms - from the time a joke about valentine's day presents from a petrol station was misinterpreted as a legitimate idea, to the time I suggested an idea, received a rejection, and then two minutes later the MD of the agency suggested the same thing, without a rejection.

But before we go into that, we should acknowledge that this is a sore point for some folks.


Some people won't feel good about this

Now, this research may bug a few folks.

It will especially bug anyone who employs team brainstorming as part of their day-to-day processes.

And I can understand why.

It goes against how many of us feel about this method.


What feels good is not always good for business

“Brainstorming” meetings can be fun. They are like parties, where you collaborate with other smart people over mugs of coffee and biscuits.

They feel creative. They feel like they lead to good ideas, more ideas.

But that’s exactly the problem, what feels good is not necessarily good for business.

Just think about what normally happens: a person invites several colleagues to a brainstorming session for a specific project.

The person feels good because if their boss or a client walks in, it will appear they are making progress on the project. They've not only worked hard to assemble a dedicated team, but they also have a flipchart of ideas to show for it.

The colleagues feel good because they have been invited to the meeting. Not everyone has been invited, which implies that the person appreciates their special talents and what they can bring to the project.

You know these feelings and I'm sure you will be happy to admit that.

But, it seems we are all less happy to admit when brainstorms don't work.


We hate to admit that brainstorms have their downsides

Because of how good they make us feel, we often find it quite hard to admit that brainstorms have their downsides.

If you put those fun-filled feelings to the side for one moment, you can probably think of examples when these criticisms apply:


Brainstorms take up a lot of resources

If we're thinking in very rational terms, brainstorming meetings can take up a lot of resources.

And, they're often managed ineffectively.

Sometimes you find that you have 8 people in one room working on one project, when it would have been better to have 2 groups of highly capable people working on 2 projects.

Brainstorms often waste resources - and I'm not just talking about the biscuits.

An organisation's best resource is its access to multiple unique minds, full of innovations that are yet to be discovered.

You could have some of the smartest people in one room for an hour, but find only two of them speak.

Brainstorms often suffer from “too many cooks” syndrome.

It doesn't take a degree in social psychology to know that groups of people can delude themselves into agreeing on a bad idea.

How many works of art can you name that have been created by committee?

Brainstorms can bring out the worst in people

Everyone has met a manager who takes a simple question to a vague statement as a personal attack.

Everyone has been cut off by an ignorant colleague who desperately just wants praise.

Everyone has regretted not encouraging an introvert to speak up and share their awesome ideas.


Consider the criticisms, even if brainstorming works for you

Now, you could argue that the people surveyed (and myself) are misanthropic cynics.

You could argue that you feel lucky to work with a great team and find brainstorming really helpful.

That may also be true.

But, let's seperate our feelings from the facts for a moment. It is hard, but let's try.


We don't want to get rid of brainstorms completely, but they need improving

There are several criticisms about brainstorms that a significant number of people have identified.

Therfore, it would not cause any harm to explore these criticisms and analyse your approach to brainstorms.

You may even feel it is fun to try out other methods of solving creative problems.

And, if you are ever unsure, ask some creative professionals for their real opinions.

Email ThisBlogThis!Share to TwitterShare to FacebookShare to Pinterest
Labels: creativity

Lewis King
This is where I test out half-baked thoughts and brain farts, then develop these "ideas" further. I am a creative copywriter, content consultant and compere.